The Prince and the Pea 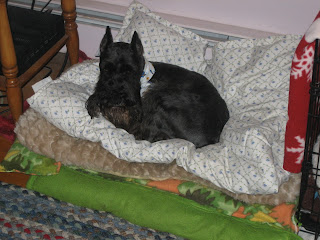 Ike says, "Always insist on 5 beds layered for the ultimate comfort."
Posted by Jules at 8:17 AM 16 comments: 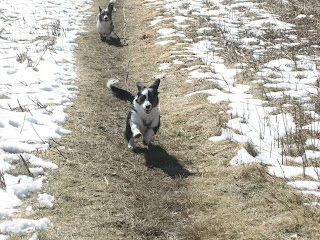 I am very remiss in my blogging!! Here’s the big news, Irie had her elbow x-rayed last Tuesday and nothing has changed! As long as we do not see signs of pain, I am not to worry about it.
The other big and surprising news is my puppy wants to be an obedience dog. It’s crazy, and yes I am serious.
We have been taking a competition obedience foundations class with Katrin. I am taking this class primarily to prep for Rally but with the understanding that we are laying the proper foundation in case we do want to do “real” obedience at a later date.
Two weeks ago we starting working on right finishes and, I kid you not, I lured Irie to do “around” twice and then she started offering it. She thinks “right finishes” and “left about turns” are SOOOOO much fun.
This past weekend we also worked on “moving downs,” “stand,” and “sit-or-down walk around your dog.”
Her brain BOGGLES my mind. The speed in which she acquires new skills is fabulous. I suppose, this is the beauty of starting work with a puppy and of course, she is whip smart.
She is not even 7 months old and she can work for a solid hour and still be ready for more.
Given how much she loves obedience, I need to reconsider how much time and attention I am willing to devote to it.
There are a few agility trials coming up and I am planning on taking her to work on being calm and working in a distracting environment. I am thinking Wrentham Outlets might also be a good place to hit up because there will be kids there and kids make her nuts with excitement and “squeee-ness.” My library is also next to a Little League field, so that’s another option. We have to work on proper child greeting. Irie wants to lick them all over and some kids are afraid. This is a fabulous thing to work through, much easier than the opposite. Ike is afraid of kids and Bug would like to herd them!
I have to say, with all of the personal crap that has been going on in my life recently, having a brilliant puppy to work with is more than a bright spot, it is a blessing.
Posted by Jules at 8:50 AM 8 comments:

Happy birthday to my favorite blue boy, my dog-husband, and fun-times only (aka no serious conversations allowed) guy, BUG! 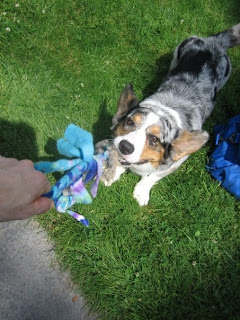 I will have to figure out a very naughty treat to celebrate the big S-I-X!! And a happy birthday to all his litter mates! 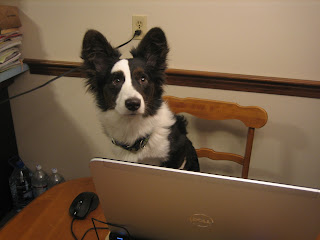 Is she blogging as Joanna suggested, or placing an order with Clean Run as another friend suggested? Either way, little Miz Smarty-Pants is up to no good! This girl is certainly a different creature than my boyz!

Labels: "too smart for her own good", Irie

Long story as short as possible, in addition to Bug being lame, Ike losing 20% of his body weight, and me dealing with some very serious personal upheavals, Irie’s left foreleg started showing external rotation aka “turn-out.” 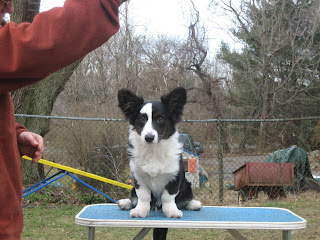 I sent stacked photos of Irie at 5 mo, 1 week to Joanna and she had some helpful supplementing suggestions. I had the chiro adjust her and discovered her accessory carpal joint, above the stop pad, was locked laterally.
I imagined (because I was watching her like a HAWK) she limped on it one day shortly after reaching out to the chiro and Joanna. So, I had the chiro take a second look at it, she then had the PT look at it, who then suggested we make an appointment with the Rehab vet.
The vet ordered x-rays and we discovered that Irie’s left distal radius growth plate is closing prematurely. 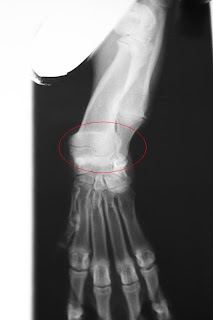 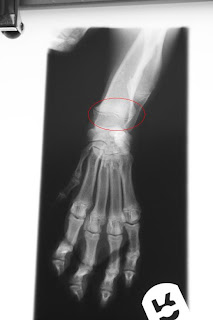 Open growth plate (above)
CRAP! What did this mean? The vet said it can be hereditary but it is more likely caused by a small trauma. With dogs that are dwarves, the growth plates are very fragile. This is why many breeders recommend waiting one year before allowing corgis to do stairs or jump off of things. I did try to limit Irie’ jumping off of things and do not allow her to go down stairs, however, she is a wild child and I cannot keep her in a bubble. At some point, some small trauma likely occurred.
The rehab vet said that surgery was a possibility in order to limit the impact on the elbow and consulted with one of her favorite surgeons. He does not do that surgery so she had me make an appointment with another surgeon she thinks highly of, Dr. Knapp at Angell.
I was prepared to be told surgery needed to happen ASAP and was sick to my stomach. I was sick at the idea of putting her through surgery and rehab and sick at the cost, both monetary and in terms of dreams. What would this mean? Did it mean I would not be able to do everything I dreamed of doing with Irie?
The consult was fabulous. The orthopedic vet was calm, knowledgeable and NOT a scaremonger! He is also not over eager to cut just to make something look “nice.” Dr. Knapp said that as long as her elbow looks the same as it does currently, and shows no sign of pain, there is no need to do surgery. If the ulna moves out of place then surgery would be necessary. To not do surgery would cause arthritis in that joint (the elbow), a notoriously difficult joint to rehab and one which carries 30% of the dog’s weight.
The best news was, as long as the angulation of her left foreleg does not change significantly, it will only be an aesthetic issue and she could still do agility and herding.
If the elbow does change and we do need to do an ulnar osteotomy (taking a small piece of bone out of the ulna so that it relieves the pressure and allows the leg to correct and grow straight), after the lengthy healing period and PT, she would be able to do agility and herding.
We will be doing our next set of x-rays next week. Please say a prayer to any gods that you believe in that nothing has changed in her elbow. She is going through a growth spurt, and is ravenous. If change is going to occur, it will occur now.
Posted by Jules at 9:56 AM 12 comments:

Homeopathy Blog for the Boy Ike is the first dog that is purely my own. We have overcome some big hurdles with his fear of people (how can you avoid them!) and continue to work on building our confidence in the sport of agility. Ike takes life at a much slower speed than I do, which is a challenge. My goal for our partnership is to figure out a sport or joint activity that Ike and I can enjoy equally and excel at together. This would be in addition to Ike's #1 sport, lounging on the couch; which I don't really enjoy or excel at.

Carmen is a 9 yo salt-n-pepper Miniature Schnauzer from the same breeder as Ike. I started working with Carmen in the winter of '08 after my DH told me we could not get another dog until the end of 2008 (enter Bug 5/08). Little did I know how much joy she would take in agility and what a spitfire she would be. We are having a ton of fun working together. Unfortunately, Carmen was diagnosed with PRA (Progressive Retinal Atrophy) in 10/08 and has been retired as her vision continues to change. 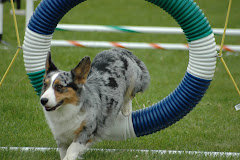 Bug (fka Honor) is a 5 year old CWC. He is a blue merle with tan points, a LOVELY temperament and a great work ethic. He finished his AKC championship 7/3/2010. Bug is looking forward to playing in Rally Obedience and tracking/Noseworks.

You can view his pedigree here.

Blogs that Make Me Laugh, A Lot